We have not done a book part of this whole books, brass, bears thing in a while.  For a while now I have been looking at the lists of “books everyone should read.”  I watched the movie The Equalizer in which Denzel Washington’s character is said to be reading through one of those lists.

Problem one is that there is definately more than one list, there are several that come up commonly in fact.  So it takes a little detective work.  I contacted my friend who is a librarian if there was a list to beat all lists that libraries and their secret societies know about.  According to Paula there is not, but she did tell me about a book that her library contained about this subject.  However, this grand tomb is a bit much.  It is 1001 Books You Must Read Before you Die, by over 100 international critics. 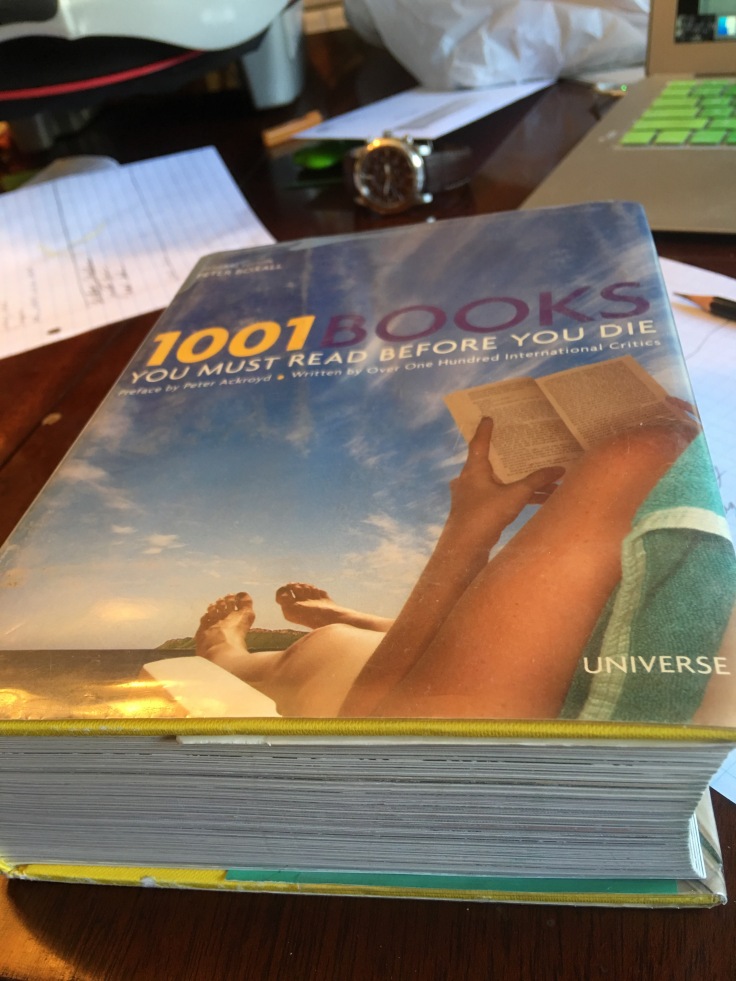 Technically this is the first review, this book is a fail.  This is exacly why college professors give you word limits on papers.  These guys did a wonderful job assembling and summarising 1001 books but, even given the total number of books in the world, this was not work.  They did not have to pick something but the Bronte sisters, everything they ever wrote is in here!  It does however have a break down by time frame, so there is a list of “pre 1700,” however there is still the horrid idea of buying a 35$ book…to tell you which books you need to read.

Much to my…utter horror To Kill A Mockingbird was top of the ranked list.  You see I was put up to reading this in highschool, except I did not do it.  I am not particularly proud of the story I am about to tell as, I look back and think I would want to beat a student senseless if they had done this.  I do not know why, I got thirty pages in, gave back my copy, and took a zero for the various assignments that went along with the book.  My teacher was a bit eccentric, and I feel like she protested her way through college, so I am guessing my lack of a few letter grade drop was due to some strange part of her being excited to watch me buck the institution.

So do I wish that I had read this back when?  Not really.  I do wish I could remember why I hated it so much back then, and perhaps not been a snot.  I do not believe though that I had the capacity to appreciate this book when I was fifteen.

I may not agree that this book is “the best novel of the Twentieth Century” as purportedly said about librarians across the country, and no I do not have an immediate contender outside of The Silence of the Lambs right now, but I am not sure this is the top.

I did enjoy it though.  I feel like this type of book is the equivalent to a blog back when, have story and a need to tell it.  It offered a nice insight into the brutal reality of a situation with no way out, and no happy ending.  The race issues portrayed in the 30s, were very relevant when Harper Lee wrote this book, and despite starting this grudgingly, and partly as a show of commitment to this list no matter what I found on it, I found myself wanting to know how it ended.  Tom Robinson’s troubles were devastating and told matter of factly, in a that is life kind of way.  The only thing that can be compared to a happy ending is the death of  Bob Ewell.  I believe in justice, even if it has to be taken, and Bob Ewell got taken out the way he was supposed to whether he did it or Arthur Radley handed it to him, but that is it.  It can be good to read this kind of reality, even if it is grounded in a fiction novel, I feel it was the reality in the world and mind of Harper Lee.

Do I believe that it should remain on the list?  Absolutely, everyone should read it.  My next trip to the bookstore will be to turn it into the next thing that lives on my shelf.

The other thing I will be doing at this time will be to at the same time create my own list, just to see how much work goes into this, and to see what I learn, and am willing to give up along the way.  It will all take years, and I hope some of you are along for the ride.  I suppose this calls for a new permanent notebook…we will see, but the first book on Bjorns list of everyone has to read it, is To Kill A Mockingbird.  I hope you all enjoy it, and if you read it back when that you will go back to it.